Sometimes the simple things in life are the best. Maybe I love this because my mum often made this when I was a child, as a dinner party dessert or as a special treat. One of many fond food memories!

In my opinion, this is an exquisite flavour combination. Traditionally I think of cinnamon as being combined with apple or even banana. But my favourite cinnamon flavoured fruity dessert, is this simple Cinnamon Peaches. With new seasons peaches just appearing and blowing my mind with their divine flavour, I thought I should share it, even though its simplicity makes me second guess doing so.

Because this is so simple, there is no hiding and the hero’s need to be tasty. So I urge you to seek out lovely fresh ground cinnamon (or even better, grind it yourself) and flavoursome peaches. Floury or flavourless peaches just won’t do!

Cinnamon is a fabulous culinary  and medicinal herb. Its traditional uses include treating poor digestion, colds and to improve energy, vitality and circulation. Many studies have confirmed it benefits, especially in balancing blood sugar levels which are important for diabetics, weight loss and stable energy levels. It has also been found to be anti-fungal and antibacterial amongst many other benefits. The fresh peach is obviously also a great source of micronutrients and fibre. The yoghurt or (cultured) sour cream is great for digestive health. The fat from all of the optional creams below helps with the absorption of fat-soluble vitamins and also sustains the release of energy.

Take a look at the variations (below the main recipe) for suggestions to alter the recipe to suit your specific dietary requirements. 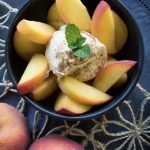 ADD TO FAVORITESADDED TO FAVORITES
No ratings yet
These  Cinnamon Peaches are the quickest, easiest and most delicious dessert. Sometimes the simple things in life area the best, and this is one of them.

Prevent your screen from going dark

Try it and let me know what you and your family think.  It's so simple, but SO good. Post a comment or rate this recipe in the comments below.